Was Amazon’s Buyout the Nail in the Coffin for Brick and Mortar Retail?

My 11 year old son recently asked me , “Why would anyone buy something from a (brick and mortar) store?” And therein lies one of the clear generational divides.

It’s a good question, of course. And what it really boils down to is, “What is the value of the experience of buying something in-store?” Customer experience is something that’s hard to describe to a fifth grader, but for those of us born in the generations before, it’s easy to define… Customer experience can be as vast as the difference between walking into the Department of Motor Vehicles or walking into the Apple Store.

Why has retail moved online? Two clear answers: selection and price. Experience was never part of the equation…it was always about the bottom line.

So what happens when Amazon, the online juggernaut hooks up with an elite grocery store dubbed, “Whole Paycheck” by so many? A lot of people were asking that very question when the merger was announced.

The answer, it soon came out, was a matter of distribution. With Amazon known for their lean methodology and profit motive, the newly minted Whole Foods distribution centers would further increase Amazon’s bottom line.

So now eight to nine months in, we are currently past the honeymoon stage and we are beginning to see Amazon’s dominant hand and mantra: profit over experience. 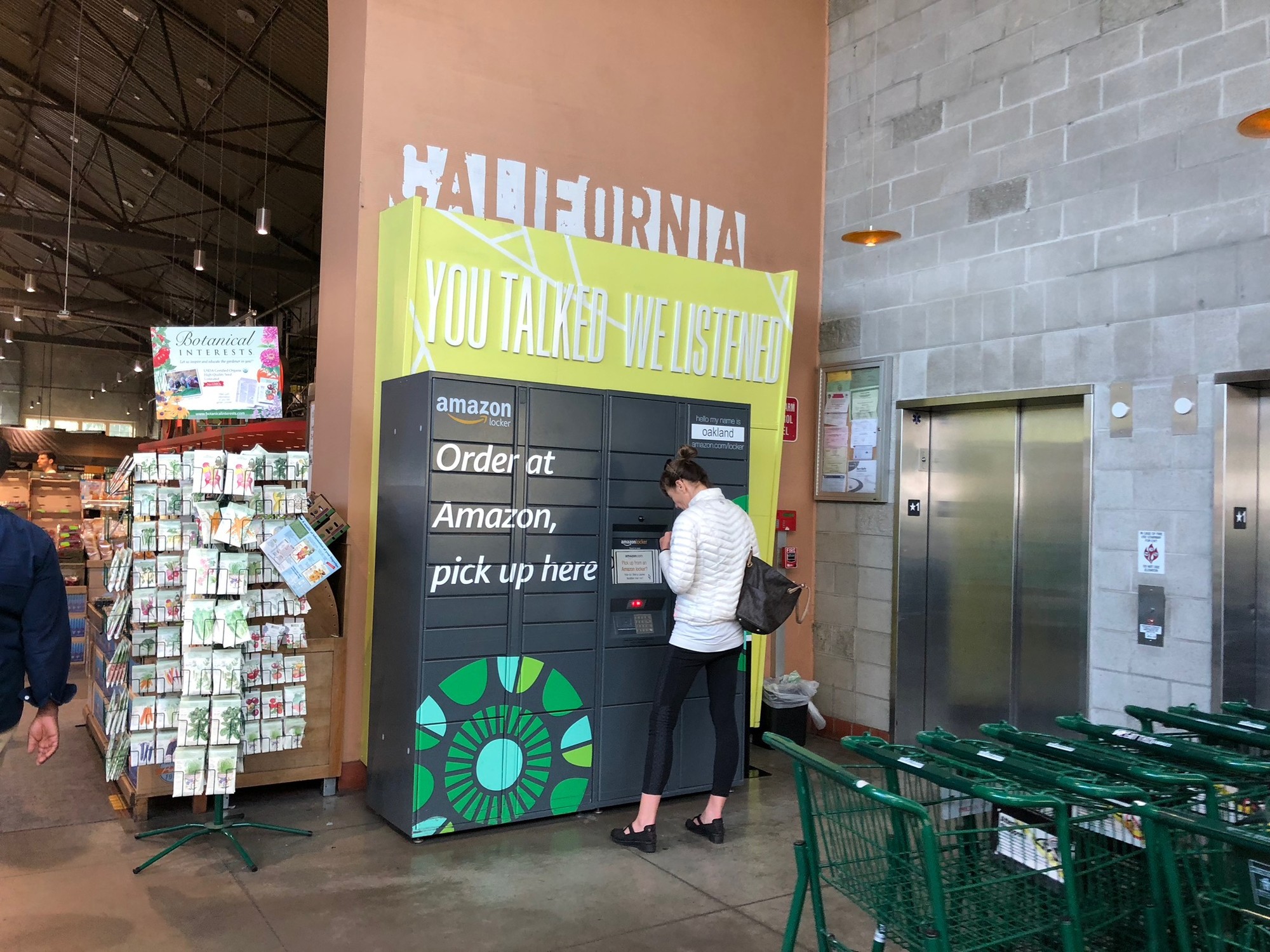 The first changes at my local Whole Foods in Oakland’s Adam’s Point district were the Amazon Echoes and tablets on display where the floral department had been. Then, the Amazon lockers moved in where the customer surveys and community message boards used to be.

Over the past few months, my local Whole Foods has virtually become an Amazon fulfillment center. In the large entrance atrium where displays of flowers, gifts and succulents used to be, now are banks of Amazon lockers, shelves of bagged groceries and lanyard draped delivery workers who load piled high carts of groceries into their cars. 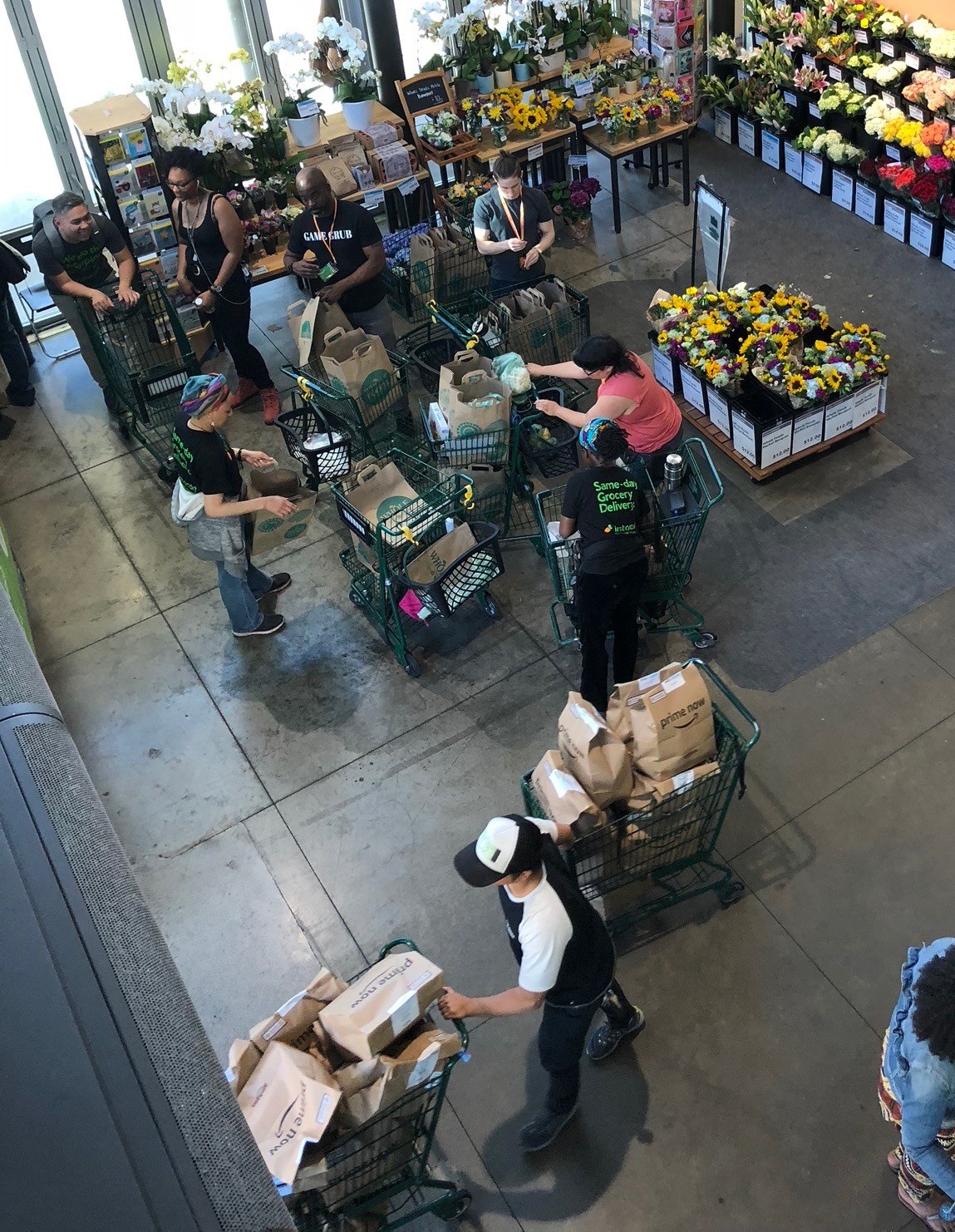 An additional large fulfillment area has also taken over the spot where massage tables and yoga gear had once been. This area houses rows of large coolers stocked with grocery orders, and 15-20 feet of tables to serve the ever growing fleet of delivery drivers…it’s a stockroom positioned within a showroom, essentially. 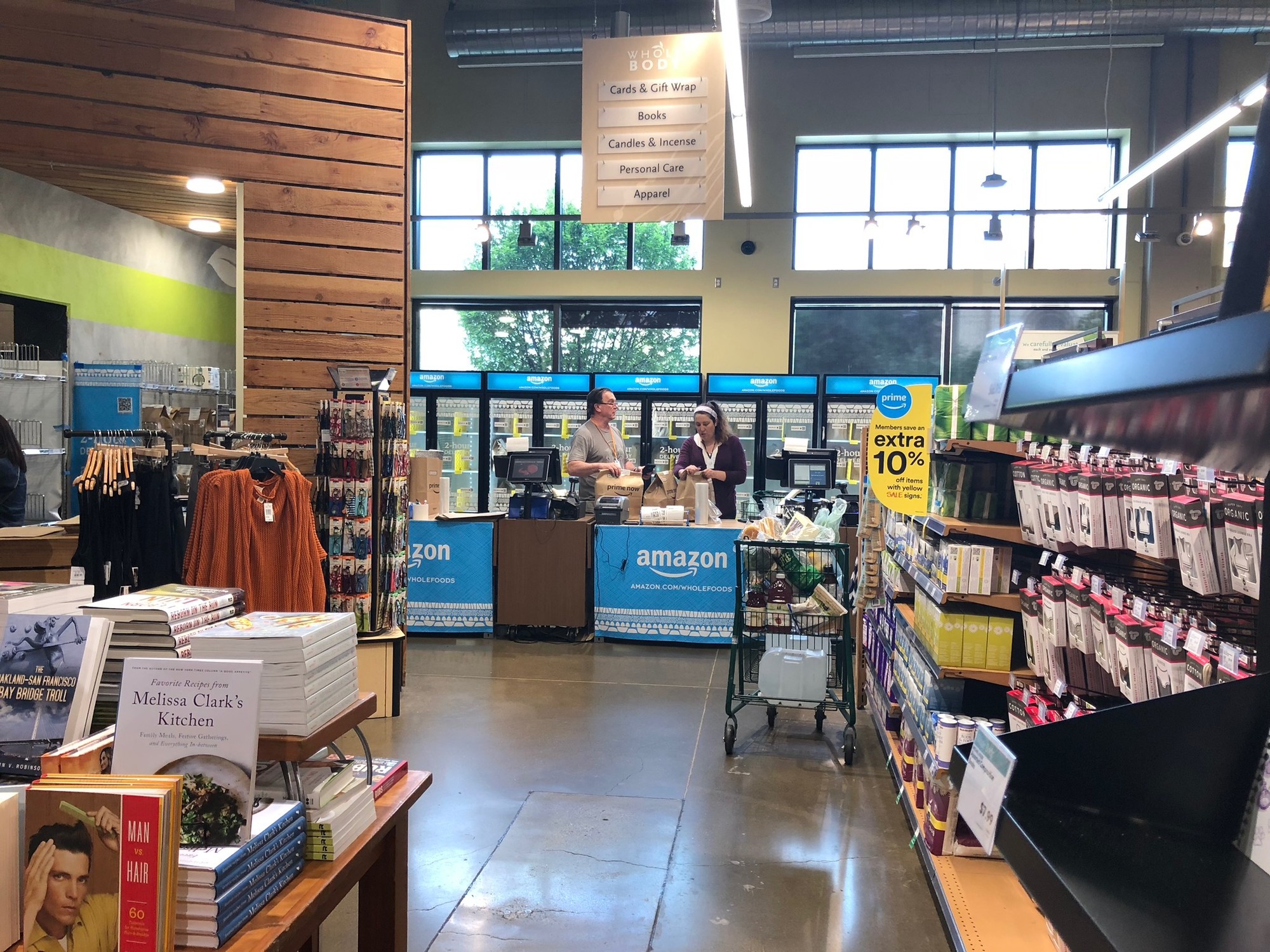 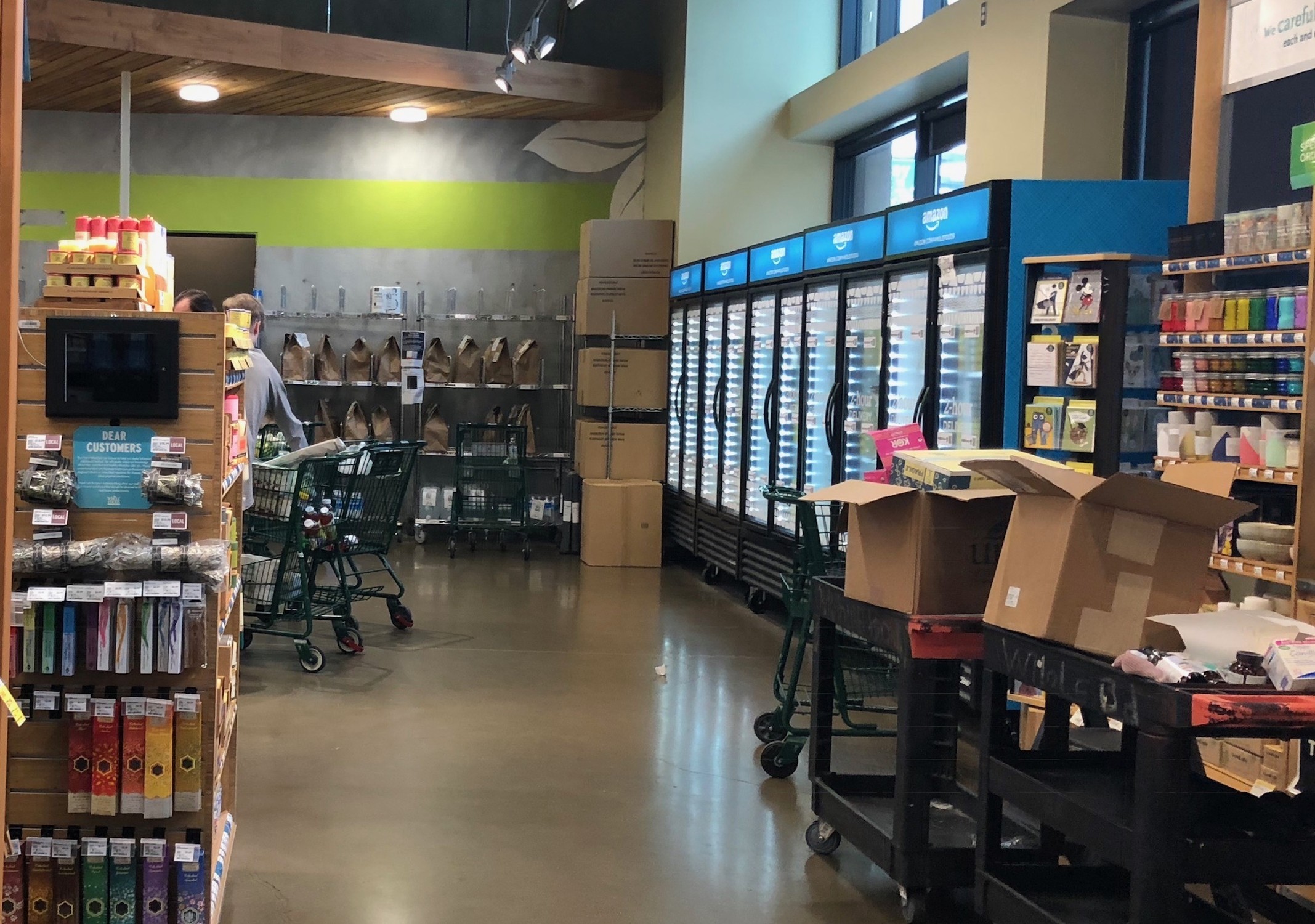 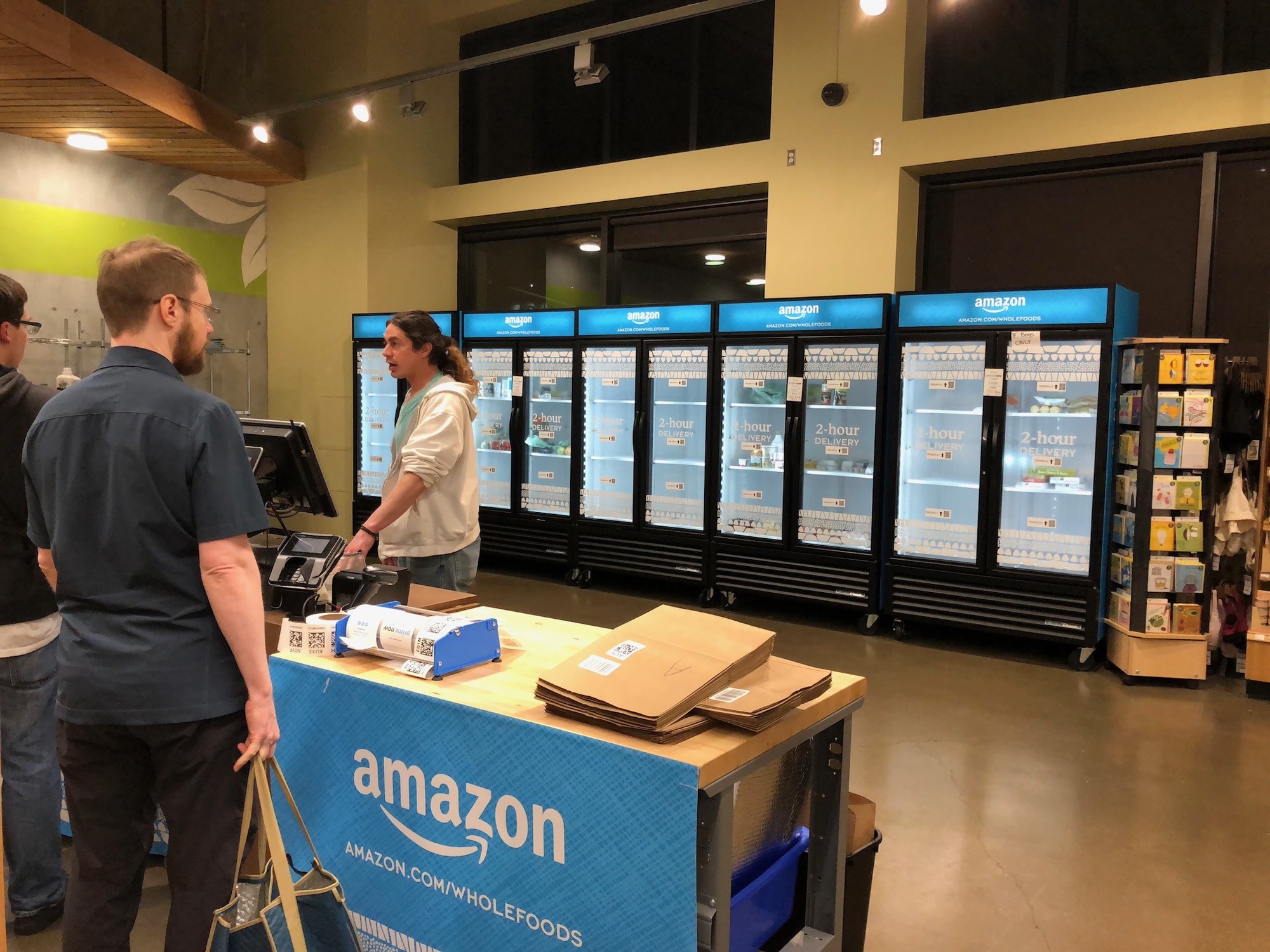 Amazon/Whole Foods aisles have become crowded with Whole Foods employees restocking with large carts at any time of day or night. One must now maneuver around the restockers in addition to the new fleets of personal shoppers buying OPGs (other people’s groceries). 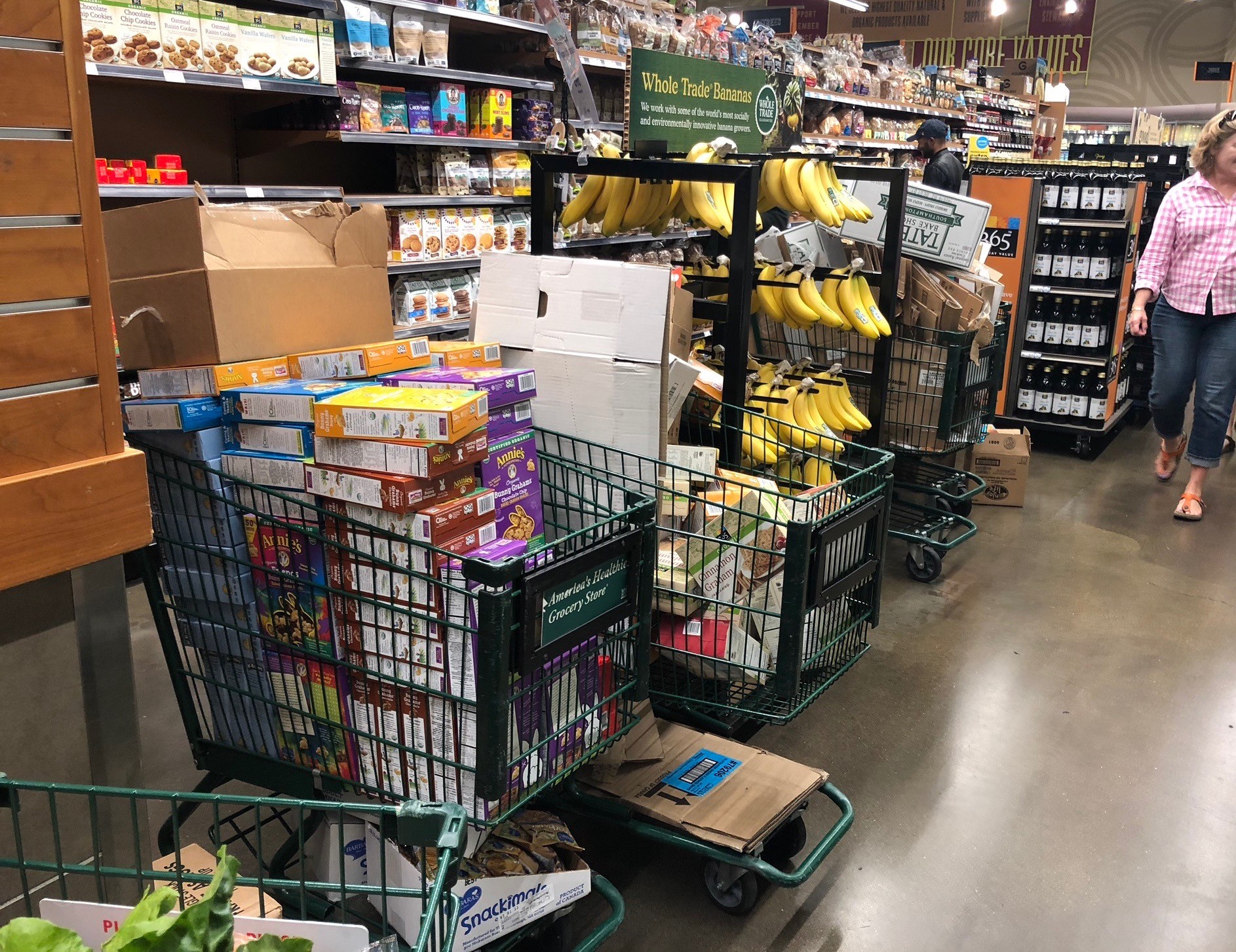 Display wise, the artisan gelato case has been replaced with Baskin Robbins style ice cream cakes. Café seating is now crowded in a cramped corner of the store to make way for a brand new taproom. On Mother’s Day, flowers were stocked in an abundance, albeit somewhat wilted abundance. Little by little, the elite customer experience that Whole Foods shoppers have come to expect is being eroded. 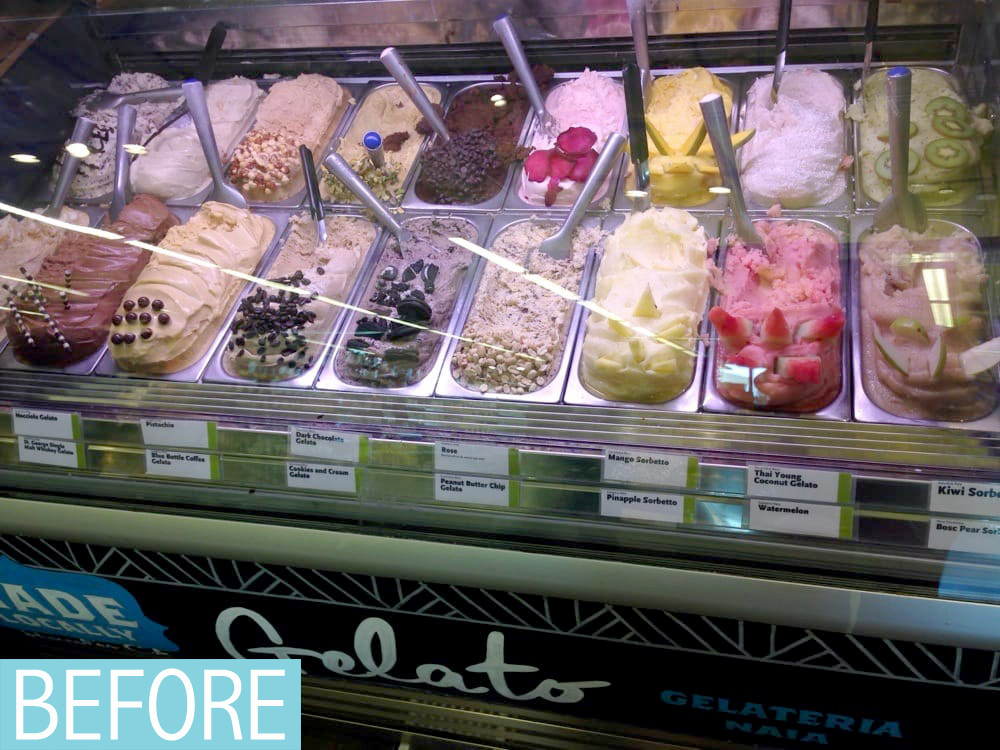 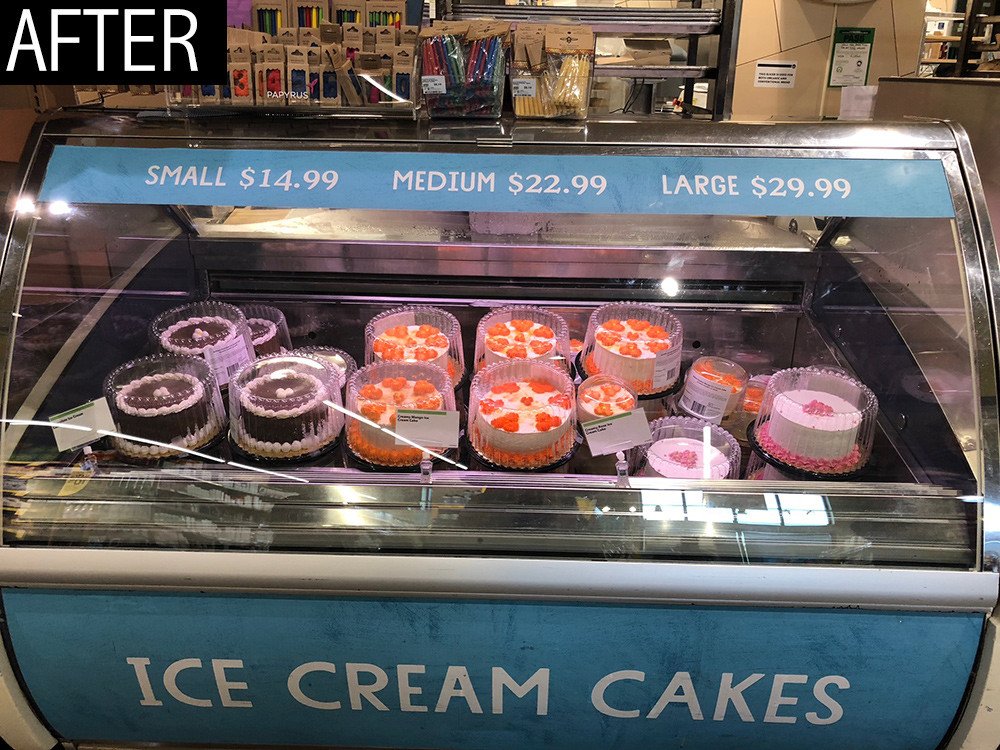 The fact is, besides a slow erosion of the merchandising finesse which Whole Foods is known for, I’m realizing that so much about the elevated experience of shopping at Whole Foods pre-Amazon, were the things shoppers didn’t see…the stocking, the warehousing, the wholesale boxes and carts. Shopping at Whole Foods post Amazon is a bit like flying Wow Air, realizing the things that you came to expect as standard (like free water and cushy headrests in the case of Wow Air, or in the case of Whole Foods, an obstacle free shopping experience) were actually amenities all along.

So why did people shop at Whole Foods to begin with? Grocery shopping in the 1980s was far different when John Mackey founded it, particularly for natural foods. At that time most of the country either had a choice of the supermarket model from the 1950s: warehouse sized, linoleum floored, florescent lit spaces full of aisle upon aisle of big agribusiness brands, tired produce and Muzak. As an alternative there were cramped and dark health food stores, permeated by the smell of nutritional supplements and stale tahini. Health food stores at that time typically stocked vitamins, a small selection of organic packaged goods, a dry goods section and a few bins of produce far past its prime. The idea of a clean, well lit and beautiful space to shop for “health foods” and gourmet selections was a completely novel experience.

“As an alternative there were cramped and dark health food stores, permeated by the smell of nutritional supplements and stale tahini.”

My first exposure to Whole Foods was in Providence, Rhode Island around 1989 or 1990. I was attending college in Baltimore, Maryland and my sister was going to Brown University. My local grocery store in Baltimore was named “SuperFresh” and was anything but. So, when my sister took me to my first Whole Foods on that summer day, it was an experience to remember. It was clean, well lit, and meticulously merchandised. I’d never been in a place that simultaneously sold imported cheese, whole grain pasta, and fancy French crockery.

“My local grocery store in Baltimore was named “SuperFresh” and was anything but.”

Many years later in 2006, the first Whole Foods opened in Oakland. It’s no exaggeration to say that it really turned a corner for the Adam’s Point neighborhood. In a repurposed behemoth Cadillac dealership, its gleaming rows of prepared foods, beautiful displays of organic produce, and fancy cheeses meant this Oakland neighborhood had finally arrived, or would eventually. Yes, the food cost more, but most definitely you were getting a ticket to the experience of shopping on shiny clean floors to select soda imported from France in a city that was best known for street crime at the time…it was a bit of an escape. Quite honestly, I abhor grocery shopping but Whole Foods was different… the difference between flying a budget airline or first class. Some days, on those long work days, it was just worth it to pay a bit extra for soymilk if it meant that I didn’t have to go to the dingy corner store or crowded supermarket. 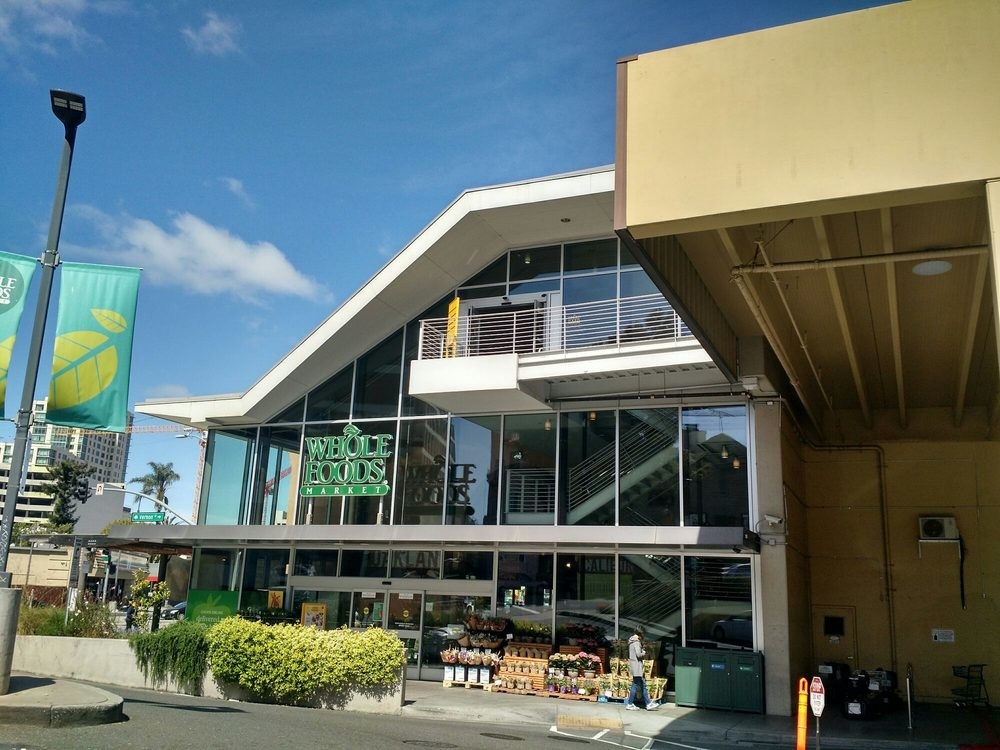 But to my son’s point, what is the value of an in-store customer experience? Does it even have value anymore? I think that is perhaps the second part of this experiment. As Amazon pushes Whole Foods prices down, it also removes the top-notch customer experience that was once emblematic of shopping there. Admittedly, no one really enjoys grocery shopping so perhaps Instacart and Amazon’s Whole Foods delivery services really are the wave of the future.

Is this merger the beginning of the end of brick and mortar? Does customer experience in the age of Amazon even matter? Or is all of this an opportunity figure out a what’s next? Let me know what you think~